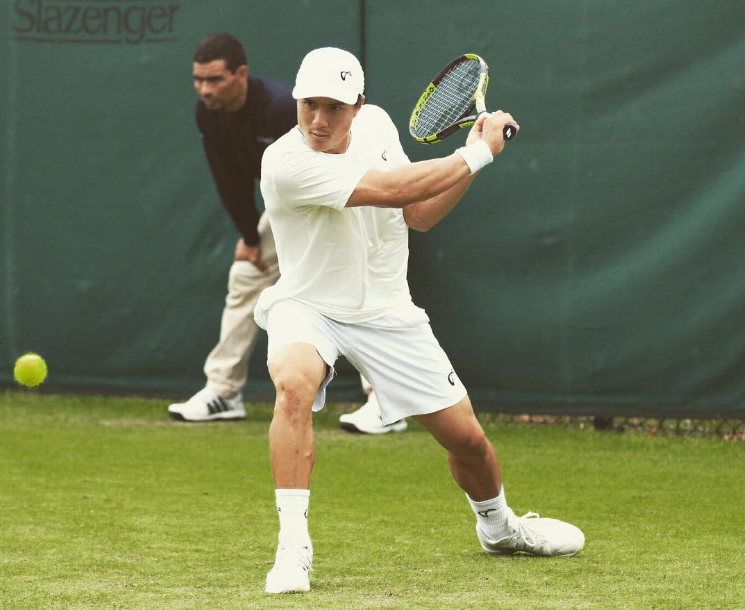 At SaltStick, we are proud to sponsor top athletes in the fields of triathlon, running, tennis and more. We are inspired by our athletes and admire the hard work and time they have dedicated to achieving success.

Because we hope our athletes’ performances will serve as motivation as you pursue your own fitness and life journey, we enjoy sharing their stories. This week’s blog post features professional tennis player Daniel Nguyen.

SaltStick-sponsored tennis player Daniel Nguyen is no stranger to success: He is the first Vietnamese American to play in the US Open tennis tournament. He’s also won a total of 7 singles and 5 doubles Futures titles, and he was named Most Outstanding Player during his sophomore year at the University of Southern California, where he was part of the USC team that won the NCAA Team Championship title four consecutive years.

For other athletes’ stories, visit any of the blog posts below:

Daniel’s first introduction to tennis took place at age 4, when his mother taught him the sport at a local park. For the next several years he watched his older brothers compete, and by his teenage years he had developed a love of tennis on his own.

After high school, Daniel attended the University of Southern California (USC), where he played tennis for four years. Although he initially planned to pursue a career with his communications degree upon graduation, he decided to instead “take a leap of faith” and pursue his dream of becoming a professional athlete.

Daniel had always dreamed of playing in the U.S. Open, and after becoming a professional, he achieved this goal as the first Vietnamese American to play in the tournament.

Daniel says his passion for tennis comes “from deep within,” and that “tennis isn’t just about winning a competition against the guy across the net. The ultimate competition is within yourself.”

Keep Your Eyes on the Prize

“There’s no two ways about it,” says Daniel. “Tennis is a grueling sport. When you are competing on the court, it’s fast-paced, hard-driving, bullet-speed strategies, and cat-like reflexes.”

The game is also highly cerebral. Daniel says his greatest surprise was realizing how “mental” the sport is after he switched from playing in college to playing the sport as a professional. A tough edge emotionally and psychologically is just as important as an edge physically.

To develop these skills, Daniel spends hours and hours each day working toward improving his tennis game.

A typical training day for Daniel will include 2 – 3 hours with his tennis coach, an hour of general fitness work with his trainer, rehab with his physical therapist, and a bout of hot yoga. The specifics of each grueling task vary week to week, depending on Daniel’s tournament schedule. As he approaches a big event, he’ll taper off a bit from the intensity to preserve his health and fitness for competition.

As SaltStick-sponsored tennis athletes Jason Jung and Danielle Lao have both said in previous blog posts, technique work is vital for Daniel’s success on the court. Thus, he spends a lot of his time working on weaknesses through drill work with his coach and with other tennis players.

“Within each element of training, there are specific skills, approaches and strategies to be refined,” says Daniel. “After working on tennis drills both with my coach and another tennis player, we practice and play tennis points. Generally, we will play different types of tennis games and my coach will give advice on the side. Each practice is structured differently.”

Rest days are also important for recovery, and Daniel usually spends one or two days on the weekend relaxing with friends and family, away from the training.

Thanks to @waiakea for the logo on my shirts. Big shout out to @rocketrm for the fitness training this week! #Waiakea #LiveWaiakea #hoss

Daniel lists his family, friends, community, and inner-belief are as driving forces to keep him coming back to the court, day after day. But he is also spurred by a greater goal: to motivate other tennis players across the globe.

“It would be rewarding to see other Vietnamese or Asian players to pursue professional tennis, as the sport is under-represented by Asian players,” says Daniel.

“Tennis has helped me tremendously to build character, learn about different cultures, and meet interesting people. I’ve grown each year on the professional tour and I’m thankful for the opportunity to play the sport. I hope one day I can use tennis as a platform to motivate and help others. The future is bright!”

Like many endurance athletes, nutrition is hugely important to Daniel, who currently eats a high-carbohydrate and low-protein diet. He tends to eat organic and avoid processed foods, although he may splurge every now and then on a sweet treat.

“Pumpkin pie is my kryptonite, and during the holidays I will splurge on some pies,” Daniel says.

His favorite post-workout meal is easy and simple: grilled chicken with brown rice, avocado, and vegetables.

“It’s a classic meal for most athletes because it’s balanced in the food groups, has healthy fats, and essential nutrients,” says Daniel.

Five electrolytes in particular play a pivotal role in maintaining normal human muscle function: sodium, potassium, magnesium, calcium, and chloride. A shortage of any of these electrolytes will affect athletic performance through a range a subtle to serious side effects.

Consuming sports drinks isn’t enough: Most people’s sweat contains sodium at a concentration of 40-60 mEq/L, and in order to stay hydrated, an athlete should replace salt and water and a similar concentration. However, many sports drinks are only concentrated at a 20 mEq/L level (increasing sodium beyond this level results in a less pleasant taste, closer to sea water).

“Tennis can be a physical and emotional roller coaster during a match; SaltStick helps me maintain my electrolyte levels, especially during tough times in a match,” says Daniel. “It’s amazing how SaltStick capsules have helped my body to sustain longer extreme practices and marathon tennis matches in humid and hot conditions, which is the true test.”

SaltStick also helps Daniel recover by ensuring he is replacing lost electrolytes quickly after he finishes training and competing.

“Recovery is vital in tennis, especially when playing consecutive matches,” says Daniel. “I can confidently state that the capsules have enhanced my recovery time.”

“Because precise skills are needed, it can be frustrating at times,” says Daniel. “It is important for the beginners to be resilient and learn from failures, just as pros do. Enjoy what you’re doing and have fun with the sport.”

After players move beyond the beginner level, Daniel recommends they pursue coaching or another form of guided improvement.

“If tennis is something they really love and want to pursue, I would recommend finding a trustworthy tennis coach or mentor and have them help with monitoring the daily practices and setting short/long term goals,” Daniel says.