At SaltStick, we are lucky to sponsor some pretty amazing athletes. These athletes put in huge amounts of work, showing incredible dedication to endurance sports, and we think their inspirational stories should be shared with you.

Tweet this post! “I am inspired by @KatieSpotz and her pursuit of endurance for a greater cause! http://bit.ly/1HCRiey via @SaltStick #JustKeepRowing“

One of our sponsored athletes, Katie Spotz, shows that it’s possible to succeed in endurance sports and make an impact at the same time. Since age 18, Katie has tackled one endurance challenge after another (including, but not limited to, an ultramarathon, long-distance triathlon, a 325-mile river swim and a 70-day solo rowing trip across the Atlantic Ocean). All the while, she has actively fundraised for clean water causes, raising more than $275,000 to date.

In this blog post, we want to share Katie’s story and her advice to novice triathletes about everything from motivation to nutrition.

Keep reading all the way to the bottom! As a thank you to our readers, we’re offering a giveaway of Katie’s new book, Just Keep Rowing, along with a sample our new product, SaltStick Fastchews. Details to enter are below.

*For other stories of sponsored athletes, check out our posts on Lauren Goss and Michelle Barton. 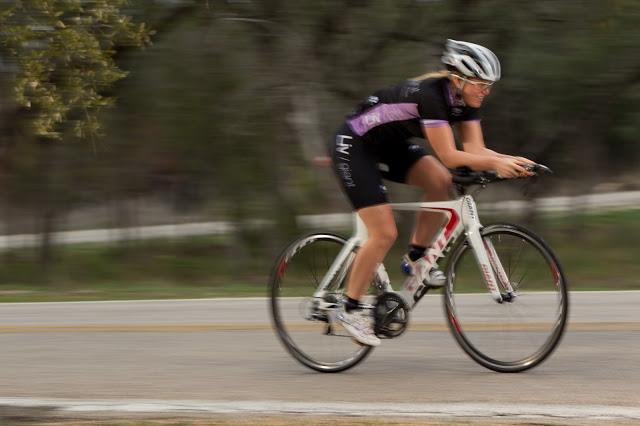 Katie’s active lifestyle started at an early age. Although she participated in nearly every team sport, she always seemed to be delegated to the bench. This began to eat away at her belief that she could be an athlete for a living; however, all of that changed when she signed up for a running class at age 18.

The class, which met a few times per week, soon sparked a love for running that quickly blossomed into marathon ambitions. Less than a year later, she completed her first marathon, still at age 18. After success in running, she decided to make endurance sports her lifestyle.

“Endurance challenges and adventure soon became what I breathed, ate and slept. I was either on an adventure or planning the next one,” Katie said.

The Solo Journey Across the Atlantic:

After the marathon, Katie turned her sights to a much grander challenge: rowing across the Atlantic. Alone.

For two years, Katie planned the trip, during which she raised more than $100,000 for the Blue Planet Run Foundation, which finances drinking water projects around the world.

Before starting the 2,817-mile journey, Katie’s longest trip was a 40-mile row on Lake Erie. Although it ended with her boat being pinned against a cliff by wind and waves, Katie was undeterred.

“For this journey I really couldn’t think that far in advance because otherwise it would be overwhelming,” Katie told The New York Times after completing the 70-day journey across the ocean. “It allowed me to focus on what was happening in that moment.”

While Katie was accompanied by an iPod to play audiobooks, solar panels, a water desalination machine, batteries and nearly half a million calories’ worth of food, the journey was nothing short of awe-inspiring. She faced sharks, dolphins, fish that slapped her in the face, 20-foot waves and a constant battle to obtain enough sleep to keep up with the eight to 10 hours a day of rowing.

Nevertheless, in the spring of 2010, Katie became the youngest person to ever row across the Atlantic solo, at age 22 — just four years after her initial start in endurance sports.

What is Katie up to Today? 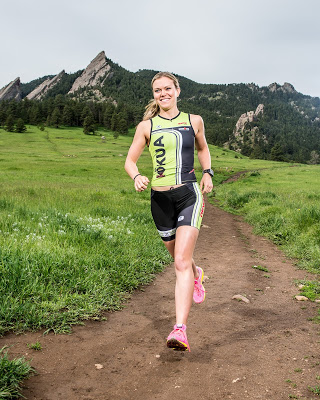 Katie continues to take on new and exciting endurance challenges. Since her journey across the Atlantic, she has completed many impressive feats of endurance, including a 3,300-mile bike ride across America, a 325-mile river swim, and several desert runs.

Lately, Katie has taken on long-distance triathlon as a challenge. After completing her first long-distance race in 2013 (in which she finished second overall, despite having the goal of “just finishing”), she most-recently completed Ironman Chattanooga.

Katie is currently training for Ironman Texas and Ironman Maryland 2016, hoping to earn a spot at the Ironman World Championships in Kona, Hawaii. After that, she plans to change focus yet again.

“Beyond triathlon I have an interest in pursuing ultra-running once again and am really excited to switch things up in 2017,” Katie said.

“Endurance has been a valuable teacher to me,” Katie said. “It has taught me to accept the low moments as part of the process to reaching your potential. I think the greatest strength you can ever gain from endurance is to push through the moment of doubt. Pushing beyond what you thought possible. And the only way to get there is just keep going.”

With all that training, motivation can sometimes lull, but Katie has found a good routine to stay interested in triathlon. Even though places out West, such as Boulder, Colo., or Southern California seem to be the ultimate mecca for endurance athletes, Katie chose to stay in her hometown of Cleveland, Ohio.

“Training with friends has helped me stay motivated and passionate about the sport,” Katie said. “It helps to do group trainer rides and find a good movie to watch or music to listen to. I also try to maintain balance with pursuing interests outside of endurance and triathlon to prevent burn out.”

While she acknowledges that triathletes can get inspiration from “more famous and successful” athletes, Katie says she is most inspired by her training partners.

“I’ve made some great friends in the endurance community, one of the other best parts of being an endurance athlete — finding others that are equally as committed and passionate,” Katie said.

What is Katie’s advice to novice triathletes? Don’t limit yourself. One of her favorite sayings is “Never try, never know.” And, indeed, she has definitely lived by that philosophy.

“Whenever I talk about Ironman or endurance to others that aren’t involved with the sport, often they will say, ‘I could NEVER do that,’” Katie said. “My response? ‘I thought that at one point too.’ If someone else can do it, why can’t you?”

Endurance Sports as Part of a Greater Cause:

In addition to her athletic feats, Katie serves as an inspiration to us and many other endurance athletes because she competes for causes greater than herself.

Like we said before, Katie raised more than $100,000 for the Blue Planet Run Foundation during her journey across the Atlantic. Today, she speaks to schools about her work with H2O for Life, which provides a service-learning opportunity for students, youth groups, and faith based organizations to raise awareness about the water crisis.

“What makes triathlon and endurance challenges to much more meaningful for me is the ability to stand behind something I believe in along the way,” Katie said.

To date, she has raised more than $275,000 for clean water projects worldwide. At every long-distance race she’s done, she has been able to help at least one school gain access to clean, safe drinking water on behalf of H2O for Life.

Like any endurance athlete, nutrition has played a large role in Katie’s success.

When she rowed across the Atlantic she had to consume 5,000 calories per day to maintain her weight. This meant lots of dehydrated foods, along with snacks such as dried fruits, nuts and energy gels. To maintain her nutrients, she brought a sprouting kit on board to grow lentils, peas, barley, alfalfa, broccoli and other greens. She also ate a lot of chocolate.

Today, nutrition has taken on an even greater role now that her focus is on long-distance triathlon.

“Because of hypoglycemia, it’s even more important for me to get it right,” Katie said. “I’ve found that during racing that sports drinks, gels and SaltStick Caps are all I really need to perform at my best, and during training more solids or real foods included are incorporated. It doesn’t take long to realize that even if you are super fit, nutrition is just as important, if not more important, in racing and training.”

How does SaltStick help Katie? A fellow athlete introduced Katie to SaltStick after she was hospitalized for hyponatremia (a dangerous condition in which sodium levels are too low) after an ultra cycling event.

“I knew I needed to find a solution, and SaltStick has been just that,” Katie said. “It helps me keep my electrolytes in check and prevents any cramping issues. I couldn’t be more grateful for SaltStick’s support in keeping me doing what I love the most — swim, bike, run!”

A note from us: We are equally happy to support such an awesome athlete as Katie!

Katie recently published a book called Just Keep Rowing, a story of self-empowerment with 70 life lessons that parallel the number of days she spent rowing across the Atlantic Ocean.

Also! For one lucky reader of this blog post, we are giving away a FREE copy of Katie’s book. Details for how to enter are below.

Always focused on a greater cause, Katie is currently raising money for a school in the Dominican Republic on behalf of H2O for Life. If you’d like to chip in and help her reach her fundraising goal, please consider making a donation.

We’re giving away a FREE copy of Katie’s new book along with a sample of our new product, SaltStick Fastchews to one lucky reader.

Need a sample tweet? Try this one: I am inspired by @KatieSpotz and her pursuit of endurance for a greater cause! http://bit.ly/1HCRiey via @SaltStick #JustKeepRowing

Also, make sure you thank Katie if her story inspired you! 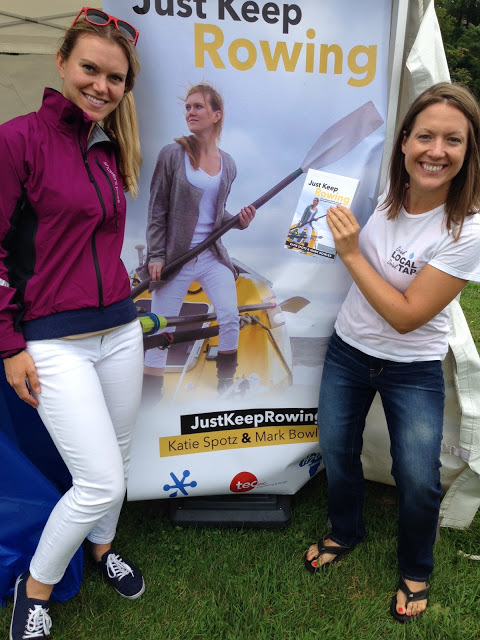