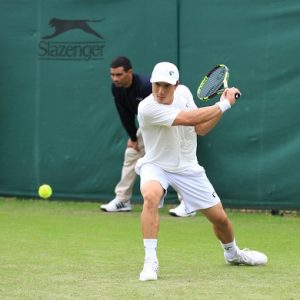 Daniel’s first introduction to tennis took place at age 4, when his mother taught him the sport at a local park. For the next several years he watched his older brothers compete, and by his teenage years he had developed a love of tennis on his own. After high school, Daniel attended the University of Southern California (USC), where he played tennis for four years. Although he initially planned to pursue a career with his communications degree upon graduation, he decided to instead “take a leap of faith” and pursue his dream of becoming a professional athlete.

Daniel had always dreamed of playing in the U.S. Open, and after becoming a professional, he achieved this goal as the first Vietnamese American to play in the tournament. Daniel says his passion for tennis comes “from deep within,” and that “tennis isn’t just about winning a competition against the guy across the net. The ultimate competition is within yourself.”

“When the match gets grueling, I count on SaltStick to keep me hydrated. I’ve been using this product for eight years, both in college and now on the professional tennis tour, and I absolutely love it. It’s the best!”

Traveling the world, eating, and competing.