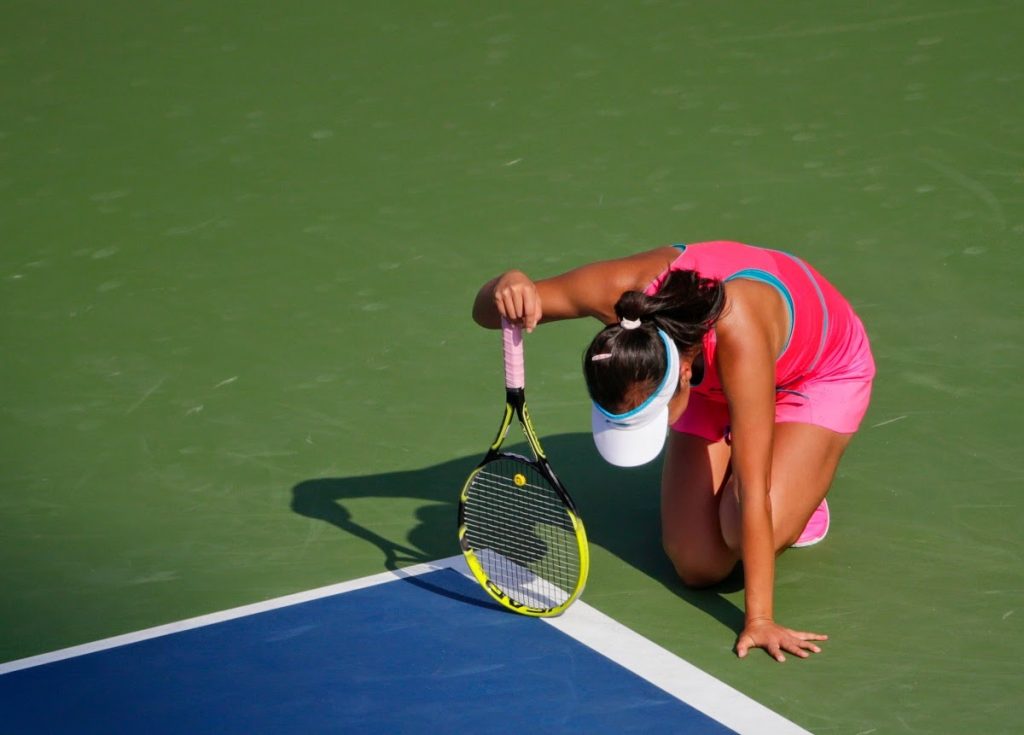 It happens to someone in every tournament. You (or your players, if you’re a coach) are playing well. You are on your game. You would even go so far as to say you’re treeing that day. Locked in competition with your opponent, you’re aware of his every move, enough that you counter perfectly. This game is yours. And then…

A cramp in your right leg. Then, sadly, the match just goes downhill. You can fight through and do your best to shuffle around the court, but cramps do more than hinder your physical performance. The mental edge you previously enjoyed is gone, as half of your focus is now devoted to overcoming the cramp.

What is a tennis player to do? Most coaches and players are aware that cramping is often related to low electrolyte levels, which is why no tennis tournament is complete without mounds of sport drink bottles, bananas and nutrition bars. However, this is clearly not enough; otherwise, cramping would not be such a widespread issue.

In this blog post, we’ll explore some of the common solutions to cramping, and then provide our view of how this situation can be avoided. We talked to tennis players of several levels, including pro tour, age group and teaching professionals about the methods they use to counteract cramps. A quick disclaimer: The science for what causes cramping is inconclusive. Some studies suggest low electrolyte levels may be the cause; other studies suggest it’s more of a neurological issue, or using under-trained muscles. However, increased (and balanced) electrolyte consumption is correlated with less frequent occurrences of cramps.

Our hope is that players and coaches can take this information, test it, and come to a conclusion of what may work best in their individual situation.

What you may have heard:

Many methods for dealing with cramping are based solely on anecdotal evidence. Because there are so few science-based approaches, tennis players are forced to rely on the “hey, it worked for me!” approach. Needless to say, what works for someone will not work for everyone. Here are a few remedies you may have heard or tried:

Salt + Gatorade: While not as popular anymore, one approach to obtaining enough electrolytes is to dump table salt into Gatorade, to increase sodium levels.

Mustard: The popular anti-cramping solution at the moment is mustard packets. Forgoing the taste issue (does anyone actually enjoy sucking back those yellow packets?), not many people know why the mustard thing works at all. Not even the medical community is sure.

Pickle juice: Though it’s more popular in the endurance community, pickle juice is another “at-home” remedy for cramps. (Of course, with the average singles match lasting 90 minutes, during which players cover 3 miles movement, it’s entirely possible to group tennis into this community). Many people have reported immediate relief from cramps, and a few scientific studies actually back up its effectiveness.

What we think you should try:

Magnesium-rich diet: As we wrote above in the mustard section, low levels of magnesium are often tied to cramps. Additionally, many people do not get adequate levels of magnesium in their daily diets (57 percent of U.S. adults as estimated by the USDA). The importance of magnesium is less known than sodium or potassium, so there is less of an emphasis on including magnesium-rich foods in an athlete’s diet. Counteract this by eating plenty of foods rich in magnesium, including legumes, whole grains, almonds, dairy products, chocolate, broccoli, squash, and other dark green leafy vegetables..

There is not much more thinking required on your part. Ratios are great because they’re intuitive, and SaltStick Caps allow you to focus on your training or racing, and not on doing math in your head! After you adjust your SaltStick Caps and water intake based on the conditions and your unique needs, you’re free to accomplish what you set out to do: get in an awesome workout or tournament performance! No thoughts about ratios. No worries of becoming dehydrated. No lists you’ll need to follow.

Up next: Hitting the wall in tennis

This post is Part 1 of a two-part series of how SaltStick can help tennis players and coaches perform to their peak potential. Part 2 will address how salt supplementation can eliminate the feeling of “hitting the wall” or running out of energy late into a tournament. Below is an excerpt:

In the recent standoff between Novak Djokovic and Andy Murray during the 2015 Miami Open, stamina played a huge role in the ultimate success of Djokovic. As the Miami Herald reported:

“Djokovic earned his fifth Key Biscayne title Sunday, beating Andy Murray for the seventh consecutive time by showing superior stamina in the subtropical heat to win the Miami Open final 7-6 (3), 4-6, 6-0. Murray broke in the final game of the second set to even the match, but fatigue then became a factor on a sunny, humid, 80-degree afternoon.”

The newspaper was quick to attribute the win to “superior stamina,” but it does not address the underlying cause for why Djokovic was able to maintain physical performance beyond Murray enough to dominate in the last set. Was it mental will? Likely not, as both men are in the top of their field. Physical conditioning? Maybe, but also unlikely for the same reasons.

This leads to the broader question of whether or how much control we have over our physical performance. If we turn to science, we see that physical conditioning is important, but equally important is nutrition. In this blog post, Part 2 of our series in how SaltStick can help tennis players and coaches perform to their peak potential, we’ll examine nutritional causes — particularly the role of electrolytes — for improved physical stamina.

Photo: Peng Shuai, of China, kneels on the court with a cramp in her leg during the semifinals of the 2014 U.S. Open tennis tournament against Caroline Wozniacki, of Denmark, Friday, Sept. 5, 2014, in New York. Peng left the court in a wheel chair and retired from the game, forfeiting it to Wozniacki. (AP Photo/Julio Cortez) ORG XMIT: USO189