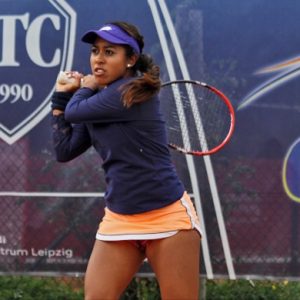 From day one, Sabrina was destined to be on a tennis court. Her parents both immigrated to the United States, meeting and falling in love on a tennis court in Los Angeles. Throughout her childhood years, Sabrina climbed the ranking charts in the juniors with the help of her father, who is also her coach. Eventually, the hard work and determination paid off, when she obtained a full ride scholarship to the University of Southern California.

As a product of the Los Angeles public tennis courts, Sabrina’s humble upbringing propelled her to success at USC and sparked a drive to pursue a professional tennis career. At USC, Sabrina achieved #1 NCAA singles and doubles rankings, 5x All-American status, and USC’s first-ever NCAA Doubles Championship title. Today, Sabrina has multiple WTA top-200 wins, two ITF pro singles titles, and nine ITF pro Doubles titles, with her highest rankings being WTA #384 in singles and #216 in doubles. With a thirst for exploring new cultures and jetting to new cities, Sabrina loves to travel and compete all over the world.

“SaltStick enables me to compete at my highest potential, no matter the climate or unusual conditions. I’m confident in SaltStick to keep me hydrated and replenished on the practice court and through grueling matches.”

“Tennis is extremely mental. You can have two opponents, the one across the net and the one you see in the mirror. Depending on the day, you can decide how many opponents you want to fight.”