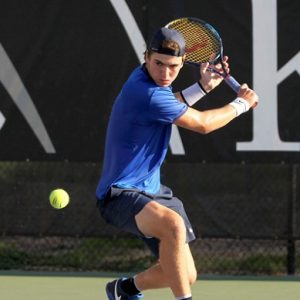 Born in London with four older brothers and sisters who played tennis, Will was constantly around the local tennis club. However, it was after his family moved to California that his tennis really started to grow. Quickly outgrowing the competition in his area, Will decided to make another jump to Boca Raton, Florida, with the USTA National Training Center down the road.

Later, Will transitioned through another jump when he won the prestigious “gold ball” event at the 14-u USTA Clay Court National Championships in 2015. He now competes in the 18-u ITF circuit, traveling around the world playing high level tournaments — in the US to South America and Europe. Based mostly in the Florida area and occasionally Barcelona, Spain, Will’s goals are to continue being not only the best athlete he can be, but the best person and to reach his ultimate goal: to play professional tennis.

How SaltStick helps Will:

“Living in a hot and humid Florida climate, along with my excessive sweating habits, SaltStick helps me sustain a consistent electrolyte level to help me perform at my best day in and day out.”