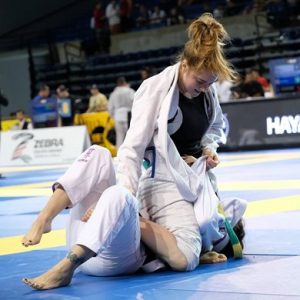 Even though Alison grew up playing soccer and dabbling in most other outdoor sports and activities in the hot and humid suburbs of Miami, Florida, she tells everyone that “never have I sweat so much as I do in jiu jitsu. Anyone who trains can relate.”

Alison’s jiu jitsu story is not one of lifelong love for the sport; in fact, the opposite. A trained yoga teacher, she had always maintained that grappling and wrestling were violent, sweaty and too close for comfort. However, in addition to discovering a profound peace in the gentle art of Brazilian Jiu-Jitsu, Alison now knows that sweating from head to toe means success, and continues to find family, no matter the city in which she is training or competing. Alison hopes to inspire athletes of all ages and abilities.

“SaltStick Fastchews give me energy for my fights, and they taste really good. I’m humbled and excited to share a unique, healthy option with the fighting world both online as well as with my Ralph Gracie Team and the gyms I visit.”