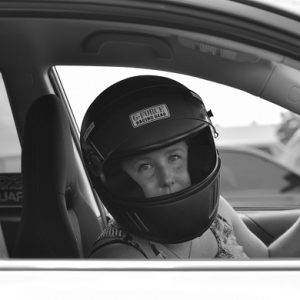 After winning her first Rallycross race in 2015, Abbey fell in love with racing motor-sport, and by the end of her first season, she won the Stock AWD Division Championship. The following year, she switched classes to Stock RWD and closed the season out 3rd overall in the Stock RWD Championship.

But Abbey’s story goes beyond the racetrack. At the start of her career, Abbey noticed a lack of female drivers and decided she wanted to make a change. With the help of her husband, she started Rally Girl Racing, which focuses on empowering women and new drivers to make the leap into Rallycross. Through her efforts, she has doubled the female drivers that now participate in the SCCA Central Florida Rallycross division.

“Unlike other racing circuits, a Rallycross course is constantly changing after each run which makes it mentally and physically difficult to constantly find the fastest race line through the course. SaltStick helps me maintain my mental focus by keeping me hydrated to lead the race.”